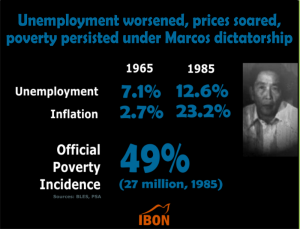 “The situation was worst in the 1981-1985 period: unemployment averaged nearly 11% including a high of 12.6% in 1985; inflation averaged over 20% including, in 1984, a high of over 47 percent. By 1985, anywhere from two-thirds to three-fourths of some 54 million Filipinos were poor; at least 27 million Filipinos or up to half (49%) of the population were in extreme poverty (i.e. those deemed “poor” according to the low official poverty line). These conditions fuelled the storm of protest and opposition to the dictatorship and precipitated its overthrow through a people’s uprising in February 1986.

“Blaming all these on the Marcos regime’s corruption and cronyism is convenient especially with the Marcos family and their cronies visibly behaving so villainously. Yet there were other Asian countries in the 1970s and 1980s that also suffered corruption and cronyism – some even dictatorial rule – but that did not experience as severe crisis. Korea and China come to mind and, closer to home, of course Indonesia, Thailand and Malaysia.

The biggest difference is that the Philippines under Marcos started implementing neoliberal “free market” policies. More than anything else this is what prevented the Philippines from becoming any sort of East Asian success story.” – from Anyare? Economic Decline Since Marcos