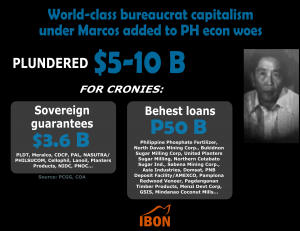 “This narrative highlights the evils of dictatorship and abuse of power. But it falters in explaining why, over three decades after the end of the Marcos regime, the economy still remains so backward in the things that matter – job creation, poverty reduction, agricultural and industrial development, and policy sovereignty.

“Bureaucrat capitalism under Marcos was undoubtedly world class and certainly added to the country’s economic problems. But the real cause of economic failure lies somewhere else – in the neoliberal “free market” policies forced on the Filipino people using the vast powers of the dictatorship.” — Anyare? Economic Decline Since Marcos