IBON Features | #BeyondElections2016 | In the Philippines, you know that it is election season again not only when political scandals are at a fever pitch but also when criticisms against the Commission on Election (Comelec) are highly agitated as well. These criticisms – like most politically motivated scandals – are well founded.

Take the recent case of “Comeleak” wherein sensitive information on the country’s 54.6 million registered voters has been leaked online following the hacking of the Comelec website.  Overwhelming public opinion pins accountability to the poll body in what could be, experts fear, the worst government-related data breach in history for its failure and neglect in protecting voters’ data, which has serious privacy and security implications.

And then there’s the legitimate concern on how the “Comeleak” has further compromised the already contentious automated election system (AES) being implemented by the Comelec since the 2010 national and local polls.

While the “Comeleak” is by itself a huge, grave and urgent issue that the Comelec must account for – several cause-oriented groups are set to file appropriate charges against the commission – deeper and more fundamental questions continue to hound the AES. For many election watchdogs, the main problem is the lack of credibility and transparency of the type of technology that the Comelec employs in carrying out its tasks under the amended Automated Election Law (Republic Act or RA 9369).

Valid as they are, these issues are merely symptomatic of what truly ails the country’s attempts at AES. The real problem lies in the fact that since 2010, the Comelec has effectively “privatized” the process of election by using a technology that is controlled by profit-driven, foreign and unaccountable corporate interests. In the past three elections (including 2016), London-based Smartmatic Inc. has already bagged some of the most lucrative deals in the history of automated elections worldwide through its partnership with Comelec even as numerous controversies facing the country’s AES remain unresolved.

From PCOS to VCM

The renaming of the machines where Filipino voters will feed their ballots to on May 9 is just that – a change in name. They are still the same type of machines marketed by the same private, foreign vendor Smartmatic. From the notorious precinct count optical scan (PCOS) machines used in the 2010 and 2013 polls, Comelec will now use a device it calls vote-counting machines (VCM) for 2016. At least, Comelec chief Andres Bautista is forthright enough to admit that the relabeling is due to the bad image of the PCOS machines that poll watchdogs dubbed “Hocus PCOS”.

Alas, the VCM does not address the basic flaws of the PCOS, much less of the entire conduct of the AES. Both utilize the same technology called optical mark reader (OMR) in recording and tallying the votes. With the VCM, the same issues that election watchdogs and local IT (information technology) groups raised against PCOS remain, particularly the lack of transparency in evaluating the vote marks, recording and counting them.

One difference this time is that the voter’s receipt feature of the machines will be activated to comply with RA 9369’s voter verifiable paper audit trail (VVPAT), one of the minimum system requirements of the law. The VVPAT also allows the voters to verify if the VCM properly read the ballot that the voter fed into the machine. But even the activation of the VVPAT has to be forced upon the Comelec by the Supreme Court (SC) and not after the poll body raising “no-el” (no election), failure or postponement of election scenarios supposedly due to the SC decision. Note also that the VVPAT activation that the SC asked Comelec to do is just partial as key information that a voter’s receipt must contain for audit purposes are lacking such as time of voting, voter’s unique ballot ID, precinct number and the alphanumeric hash code.

For the upcoming polls, Smartmatic is once again supplying the Comelec with VCM as it continues its profitable partnership with the poll body that started with the PCOS deals in 2010 and 2013. The Comelec is leasing a total of 97,517 VCMs from Smartmatic for about Php8.03 billion. In 2010, Smartmatic leased to the poll body 84,000 PCOS machines for Php7.2 billion. In 2013, Comelec purchased from Smartmatic some 82,000 PCOS machines for Php1.8 billion. Thus, Smartmatic has already bagged more than Php17 billion from its PCOS/VCM transactions with the Comelec for the past three elections, including the one on May 9.

Aside from the poll machines, Smartmatic also cornered contracts with the Comelec for other services. For the upcoming polls, Smartmatic is providing as well the Php558-million election results transmission services (ERTS). Smartmatic was able to corner the same contract in 2013 then worth Php405.4 million. Other contracts Smartmatic bagged in 2013 are the P154.5-million transmission modems; the P46.5-million compact flash (CF) cards main; and the P46.5-million CF cards worm. Comelec also purchased the canvassing and consolidation system (CCS) from Smartmatic in 2013 for Php36.6 million.

The privatization of Philippine elections covers not only the hardware and software for the automated polls; technical support to troubleshoot and address glitches is also controlled by Smartmatic. For the 2016 elections, Smartmatic bagged the Php122-million contract to set up a National Technical Support Center (NTSC) as a call center and troubleshooter for the elections. It was also Smartmatic that cornered the NTSC contract for the 2013 polls worth Php111.56 million.

All in all, the Smartmatic-Comelec contracts are worth well above Php18 billion as summarized in the table below. Note that the table is just a partial, incomplete list as it merely relied on data from various news reports. 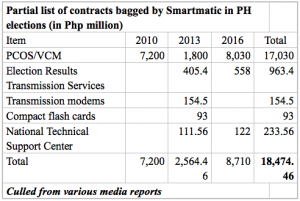 Why does Smartmatic keep on winning Comelec contracts?