An excerpt from the IBON 2018 Yearend Birdtalk paper “Faltering Economy, Shell of A Democracy”:

The socioeconomic conditions of the masses are not substantially or sustainably improving. A few gained from recent economic growth but not the people who need this the most. Domestic elites and foreign capital continue to profit but the poorest majority still grapple with worsening joblessness, low incomes, high prices, burdensome taxes and decrepit public services.

Among the most serious underlying problems of the economy is the severe albeit disguised crisis of joblessness. The situation is alarming – the economy is less and less able to create enough decent work for the growing population. There has even been a marked deterioration in the last two years under the Duterte administration.

This urgently needs to be acknowledged and addressed.

The economy was creating an average of 836,000 new jobs annually in the decade 2007-2016; there were some data breaks in this period but this is still a workable approximation. This however fell to just 81,000 jobs annually under the Duterte watch – with the 41.0 million employed in 2016 only increasing by 162,000 to 41.2 million in 2018. This is less than one-tenth the rate of the previous decade.

How is this weak job generation to be reconciled with the number of unemployed reported as going down by 62,000 from 2.4 million in 2016 to just 2.3 million in 2018, and the unemployment rate falling to 5.3% in 2018 which is the lowest in four decades? (See chart below) 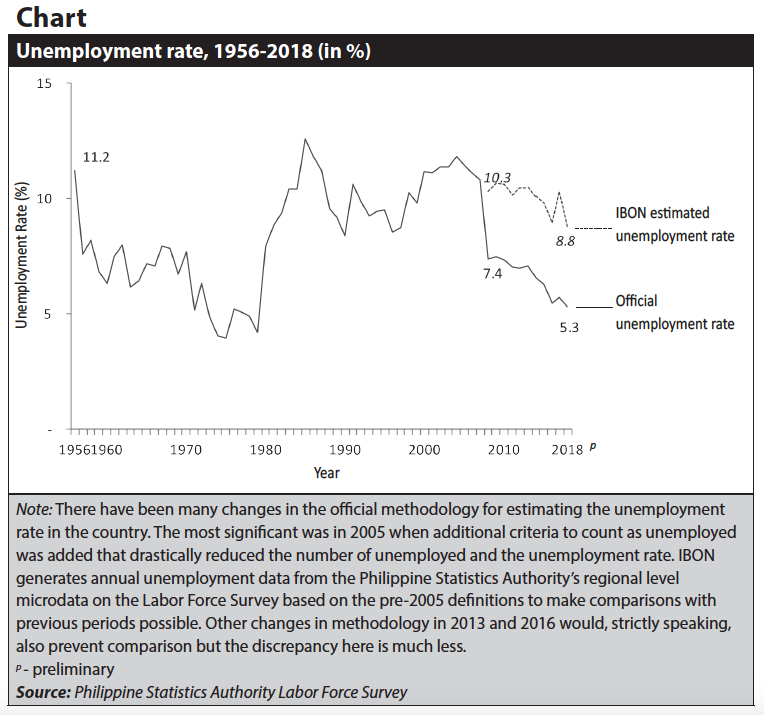 Before anything, it needs to be stressed that weak employment generation, whatever the reported unemployment figures, is a serious problem in itself. Work is essential for growth to benefit people through higher incomes; less work always means less household income and lower welfare.

Turning to the unemployment figures, the seeming improvement comes from a statistical quirk. Under present official methodology, only Filipinos without work considered as part of the labor force are counted as unemployed. In particular, it is not enough for a jobless Filipino to be of working age (i.e. 15 years old and over) to be considered part of the labor force – they must also have been seeking work and be immediately available for work.

This falsely improves the unemployment situation in two ways. The first is a result of implementation of the senior high school component of the K-to- 12 program since 2016, which added two years to basic education. This has the effect of keeping working age youth in school instead of them entering the labor force and joining the ranks of either the unemployed (thus lessening reported unemployment) or indeed the employed (hence lessening employment). Such working age youth are considered ‘not in the labor force’.

The combined effect of these two factors has been to drive the official labor force participation rate (LFPR) down to 61.2% in 2017 and even lower to 60.9% in 2018. (See table below) The LFPR last year is the lowest in 38 years or since 1980. The reported magnitude and rate of unemployment is also greatly reduced. 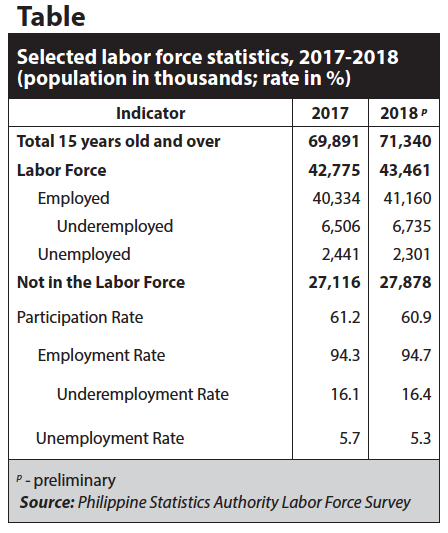 The use of stricter criteria under-reports the real number of unemployed in the country to statistically improve the unemployment situation compared to previous decades. The deep unemployment crisis since 2005 is concealed and, in particular, the dramatic increase in unemployment under the Duterte administration is disguised. ###