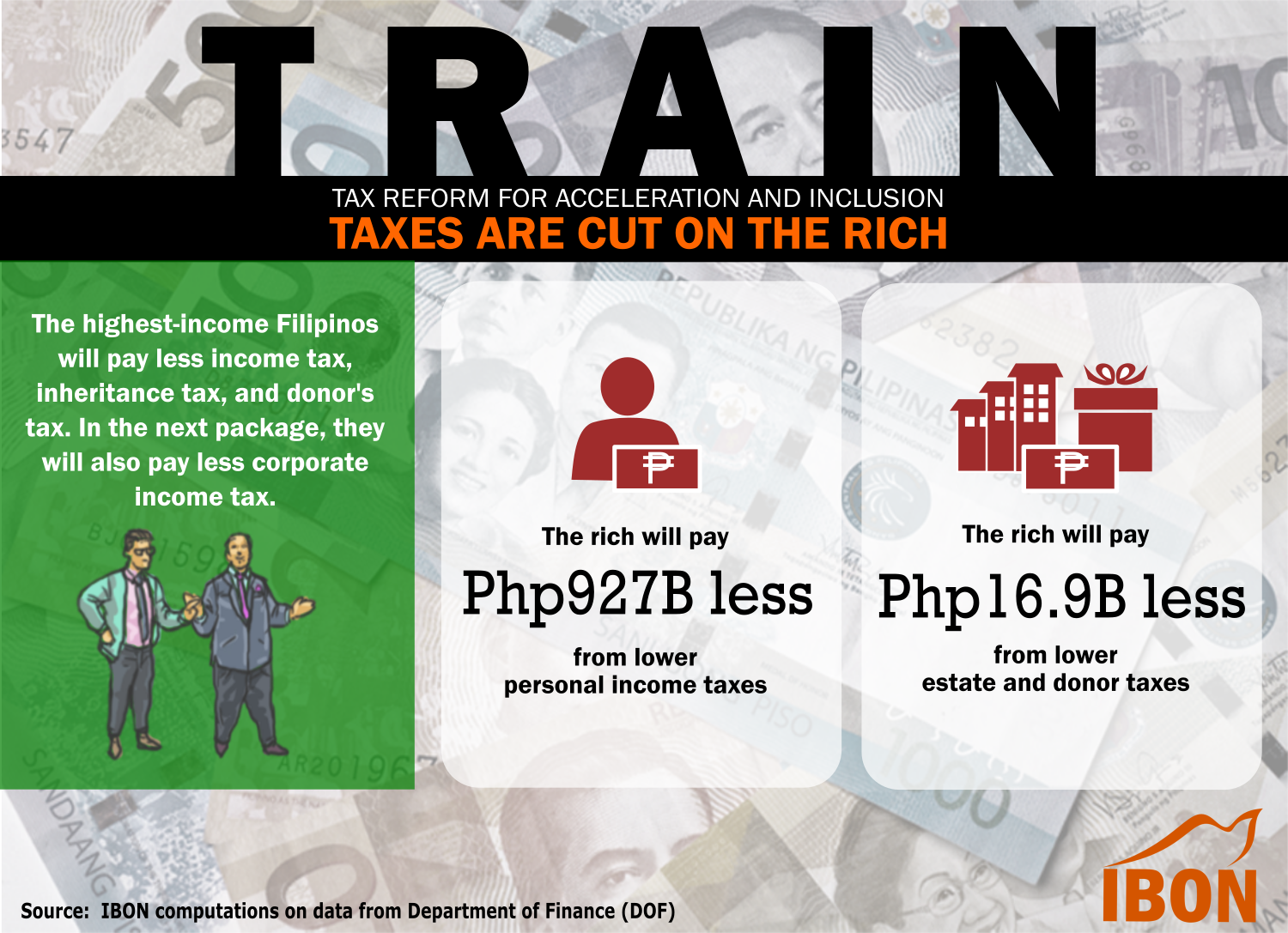 TRAIN will make the rich richer – The net impact of the change in income taxes, expansion of VAT coverage, new oil excise taxes, and inflationary effect is that the highest-earning 40% of Filipino households, or 9.1 million households with some 40 million Filipinos, will have more money in their pockets after the tax reform. This includes among the richest households in the country.

They have net gains because their increased take home pay from lower personal income taxes more than offsets losses from additional VAT, oil taxes, auto taxes, the sweets tax, and inflation. The net gains remain even if higher taxes on automobiles and especially on high-end luxury cars, which is sensible, are factored in.

Middle class households in the seventh to ninth income deciles certainly deserve relief from changing decades-old tax brackets. These include Filipino families whose only moderate incomes are doubly-eroded by inflation and by excessively high taxes. It can even be argued that the minimum figure for tax exemptions can be raised to those earning up to around Php33,000 monthly.

However it does not make sense for supposed tax reforms to give a corporate executive already earning Php303,059 monthly (or Php3.7 million yearly) an additional Php1,212. Nor does it make sense to only tax a company’s chief executive officer earning Php706,017 monthly (or Php8.5 million yearly) just an additional Php20,694; this is probably just what would be spent on a weekend family dinner. Yet the DOF’s TRAIN does just this while, to recall, taking hundreds of pesos away from the poorest Filipinos who already have so little as it is. The poorest are made to pay more out of much smaller incomes to begin with and this is not by any reasonable interpretation a “fairer and more equitable” tax system.

The DOF cites the supposedly higher income tax rate of 35% applied to the highest income bracket, compared to the current 32%, as proof of the progressivity of their proposals. This is a half-truth though because using the complete formula which includes a minimum lump sum and applying the tax rate only on the excess of income over Php5 million means that many of the country’s rich will actually end up paying less than under the current tax system.

The DOF also gives the example of the country’s top two income taxpayers whose take home pay falls in 2018 upon the tax reform to reinforce the impression that the new tax system is progressive. This is however an exaggeration and is oblivious to how the country’s super-rich use various legal and illegal strategies to avoid paying taxes including tax havens, off-shore accounts, shell companies and trust funds, smuggling and others.

The tax reform program really does nothing to address, and actually worsens, the continuing accumulation of massive wealth in the hands of a few. The country’s richest for instance also gain additional benefit from the lowering of estate and donor’s taxes to a flat rate of 6%, with the DOF estimating that they will pay at least Php3.1 billion less per year starting 2018.​ (From Buwis(et!): DOF’s Top Five Tax Reform Lies, www.ibon.org)